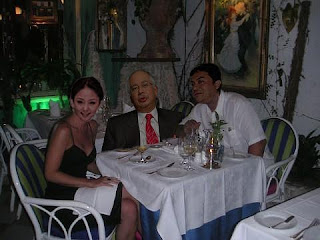 by Michael Sheridan and Matthew Campbell

A FRENCH arms company is at the centre of a deepening scandal involving the sale of three submarines, the murder of a beautiful Mongolian interpreter and the man most likely to become prime minister of Malaysia next month.

All three have been linked in a sensational sequence of revelations that has convinced many Malaysians that the woman was killed to silence her demands of a share in the rewards of the transaction.

The scandal exploded last week after the French newspaper Libération alleged that the submarines deal and the murder of Altantuya Shariibuu, 28, were connected.

A glamorous, cosmopolitan woman, Altantuya grew up in St Petersburg, spoke Russian, Chinese, Korean and English, moved in elite circles and has been dubbed “a Far Eastern Mata Hari”.

She became the mistress of a Malaysian political fixer and was allegedly trying to extort money from him at the time of her violent demise.

Two members of an elite Malaysian police unit that protects top politicians are on trial in Kuala Lumpur, accused of shooting her in the jungle and then blowing up her body with military explosives.

Azilah Hadri, 32, and Sirul Azhar Umar, 36, officers in the Special Branch, could go to the gallows if convicted of abducting and murdering Altantuya on October 19, 2006. A verdict is expected early next month.

Their trial is unfolding as Najib Razak, the country’s deputy prime minister, stands on the verge of taking over as premier after a ruling-party leadership election, due within days.

Najib was accused by a young opposition MP, Gobind Singh Deo, in parliament, of involvement in the murder. Deo was suspended by the Speaker for making the remark. The deputy prime minister has strongly denied any involvement.

Testimony in an earlier court case has established an intimate personal and financial connection between the dead woman and a close aide to Najib, who was minister of defence at the time of the submarine deal.

The aide, Abdul Razak Baginda, was acquitted by a court last November of being an accessory in the murder. He has since been working on a doctorate at Trinity College, Oxford.

Baginda admitted that the dead woman was his mistress for about a year and prosecutors said she had pestered him for money after their break-up.

Just before her death she arrived in Kuala Lumpur, accompanied by a Mongolian shaman, who was to put a curse on Baginda if he did not pay up.

Altantuya was dragged away from outside Baginda’s home by two Special Branch officers, but he was acquitted after maintaining that he never gave orders for her to be harmed.

The Libération exposé linking the murder to the shadowy world of arms contracts has embarrassed the French war-ship firm DCNS. Armaris, a firm now merged with DCNS, sold the three submarines to Malaysia in 2002 for £937m.

Attention has centred on why Armaris paid £107m to a Malaysian company called Perimekar in 2006.

Libération has alleged that Altantuya, who toured France with Baginda in a Ferrari, wining and dining at expensive restaurants, learnt of the payment. It said she was demanding $500,000 (£345,000).

DCNS has refused to comment. It is already the subject of a French judicial investigation into corrupt practices, thanks to a whistleblower who has detailed bribery and industrial espionage allegations.

Last week, efforts to contact Baginda, a self-styled political analyst, at his new home in Oxford were unsuccessful.

Najib has avoided public comment but his politically influential wife, Rosmah Mansor, told the French news agency AFP that she was “shocked” by attempts to link her husband and her to the case.

i) It's not something we LET happen. The majority is living in denial refusing to let go of status quo afraid that a change in hands holding the power might destroy the peace of their lives. Regardless of what corruption or allegations that follow - they'd rather go with what they know, dodgy or not.

ii) Just like American let the murderer of Iraqi & Afghan civilians be their president.

iii) How can the Malaysian let a suspect murderer be their Prime Minister? Interesting nation...