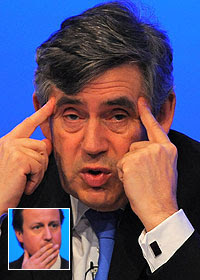 He said "extreme" action was needed but denied being bumped into the action by David Cameron's decision earlier to restrict claims by Tory MPs.

Communities Secretary Hazel Blears is to pay £13,332 over capital gains tax on the sale of her "second home" flat.

This came as allegations were made by the Daily Telegraph about money claimed by senior Liberal Democrats.

Earlier Mr Cameron outlined a series of measures he was demanding of his own MPs and said several senior Tories will repay "excessive" expenses claimed - and warned he would expel from the party those who refused.

Liberal Democrat leader Nick Clegg has told his MPs they must hand back any profit they make from the sale of taxpayer-subsidised second homes.

His comments came ahead of the Daily Telegraph reporting details on Lib Dem claims including that Sir Menzies Campbell claimed nearly £10,000 in expenses for a top designer to redecorate his London flat.

While Sir Menzies did not deny the allegations he said the claim was "within the spirit of the rules".

Mr Brown told the BBC: "It is not enough for one or two MPs to make announcements here and there."

He said an independent audit was needed and said, if necessary, it could mean repayments being made and disciplinary action being taken against some MPs.

"This is a radical move but it is necessary," Mr Brown said.

He said an independent review of every claim made would help MPs show they are "worthy of public trust".

After Mr Cameron announced new rules for his own MPs, the government asked the cross-party members allowances committee to consider its own proposals for immediate reform.

Asked if he had been forced into a response by Mr Cameron, Mr Brown told BBC political correspondent Nick Robinson: "I have been discussing this for days and we have been looking at this matter for some time. We had hoped to make some progress yesterday and now all parties are prepared to accept this."

But two senior MPs told the BBC he was "misrepresenting" what had been agreed by the committee.

They said the committee only agreed to examine the idea of an independent audit, that there was no "firm or final agreement" and would meet again on Wednesday after seeking advice on whether it was possible.

The BBC's political editor said it was clear the days of claiming for furnishings, food and bathplugs were over and in future only claims for rent, mortgage interest, council tax and utility bills would be allowed.

The cross-party committee also agreed MPs would no longer be able to nominate which property they claimed was their second home.

Meanwhile Ms Blears says she will pay £13,332 - which would have been due in capital gains tax on a flat she had designated as her second home with Commons authorities.

She said she had acted within the rules but had to recognise public anger on the issue.

Brandishing a cheque, she said she had made the decision to pay the money after discussions over the weekend with her husband.

"It affected me personally, what people said in Salford where I and my family live," she said.

"I've heard absolutely the outrage and the anger the public feel about what has been going on."

Earlier Mr Cameron said "sorry" for the actions of some of his MPs and ordered them to pay back a string of "excessive" claims.

He also announced a new "scrutiny panel" to root out abuses - and threatened Tory MPs who broke the rules with expulsion from the party.

And he said, in future, Tory MPs would only be allowed to claim for basic costs on second homes such as rent and utility bills and not, as at the moment, for furniture or food.

If MPs who have made excessive claims refuse to pay back the money, Mr Cameron said they would lose the party whip.

1. The Malaysian government should checked what kind of claims suitable and can be approved to avoid spending unnecessary taxpayers money.

2. Independent bodies should be formed to look into the allowances and introduce integrated systems, making sure allowances really need for their duties or for living and no false claims made.

3. Disciplinary and stiff actions must be taken against MPs or ministers and any false claims should be surcharged (pay back). Any MPs could be charged of wrongdoing and will be banned for standing in elections for at least a term. Code of moral conduct should be implemented.
Posted by Zali at 16:24